Posted on December 21, 2017 by anecdotaltales

Once upon a time I tried to dispose of a mouse.  You know how it goes.  You go to work, you find a mouse in a trap, and you want to save your boss a call to pest control.

You kneel down, start to open up the trap, and whoosh.  Out runs the little four-legged troublemaker.  Victory goes to the fleet of feet.

Not that long after, I came across another trap.  This time, I was pretty sure the mouse was dead.  So I—

What?  Disposing of my first dead mouse is off-putting?  It was an epic tale!  No?  Okay. 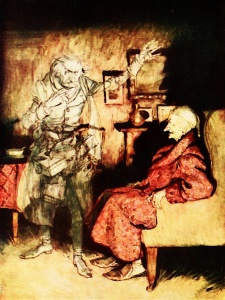 I decided to make an audio book of A Christmas Carol.  I have seen numerous adaptations, but none of them have included all the glorious descriptions.  (I get why people like Scrooged.  But to a Dickens purist, the experience is maddening.)

Sure, there are radio drama versions already out there and plenty of audio books to choose from.  (The joys of public domain property.)  But my version is unabridged and free!

I planned it in advance.  The novel is just around one hundred pages; not a gargantuan task.  Yet, a guy’s voice only lasts for so long.  The entire podcast, split up into five sections, added to up two and a half hours.  Multiply that by two or three times for editing chores.

There were burps.  There was a hungry cat that liked to meow and scratch at the door.

“Though Christmas has never put a MEOW MEOW MEOW”.

You see my dilemma.  There was the upstairs neighbor tromping around and the next door neighbor slamming his front door.

When I read aloud I try to change voices just enough so that the conversation does not come across as static or dull.  And my English accent could use some work.  My Dickensian era, London-based, elderly woman of base means?  Her voice was not perfect.  It slipped into an Irish accent.  And her cohort’s responses warped into some sort of Scottish/Russian travesty; which only made for more editing fun.

However, it all got done, and ahead of schedule.  I was able to release all five parts at once.  No waiting, no delaying; one full book ready for folks to hear. 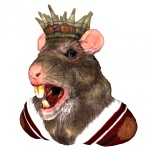 I cannot be everywhere my family is.  I have nieces on one coast and nieces and a nephew on the opposite one.  A guy can only travel so much.  Now, though, I can tell them a bedtime story.  Granted, it is one full of dislocated jaws, ghostly visitors, children that die, and threats of dark graves, but it is still a story.

Perhaps I should reenact The Nutcracker and give them nightmares of giant Rat Kings.  Traumatizing, but seasonal?  Then again, maybe telling them about dead mice would be less traumatizing.

He's a simple enough fellow. He likes movies, comics, radio shows from the 40's, and books. He likes to write and wishes his cat wouldn't shed on his laptop.
View all posts by anecdotaltales →
This entry was posted in Uncategorized and tagged audio, book, carol, charles, christmas, classic, dickens, jim carrey, muppets, podcast. Bookmark the permalink.